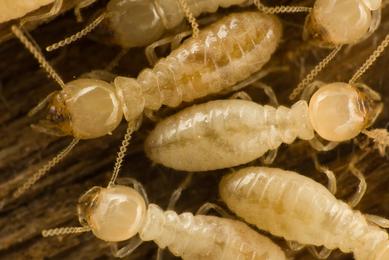 In spite of beliefs to the contrary, there really are Subterranean Termites in western Washington.  Here in western Washington we have the good fortune of having far fewer insect pests than much of the country but this fact causes many people to believe that there is no need to be concerned about them.

Unfortunately, we are not exempt, just at lower risk.

There are many species of termite in the U.S. but the two most common here are the Dampwood termite and the Pacific Coast Subterranean termite.

Dampwood termites, as the name implies, infest wood that has become saturated and only infest homes when there in an underlying moisture problem.

Subterranean termites however will infest homes whether there is moisture or not.

Usually when we think of insect colonies we tend to think of ant hills and bees nests.  Termite colonies are more amorphous, extending like root filaments in the soil.  The colony usually exists only within the top six inches of the soil but can span several acres.

There are species of termite in the U.S. capable of removing 10 pounds of wood from a home in as little as a month.  Fortunately our local species is far less aggressive.

Termites are ancient insects found in the fossil record dating back over 100 million years. Unlike other insects they have not evolved a shell capable of retaining water for long periods of time.  This creates a requirement for them to have a constant source of moisture.

Termites have found an ingenious means of conducting moisture across great distances.

From a colony in the soil termites build mud tubes across surfaces to conduct moisture into the wood where they feed.  They are very careful to keep their tubes water tight and will immediately repair them when damaged.

Because of this moisture requirement the closer a structure is to the soil the greater its risk of infestation.  Slab floors and earth filled porches are the most common points of entry but leaking windows and door frames can attract them to areas far above ground.

In areas where a hot water tank has been set on the slab floor escaping heat through the base of the tank can also be very attractive.

Often the mud tubes are the only sign of trouble unless the insects swarm into your home.

Subterranean termite swarms occur here from August to November peaking near the end of September.  The swarming insects are about 1/4 inch long, black with clear wings and can be seen emerging from the ground on warm autumn days usually following a light rain.  After the nuptial flight they shed their wings and mated pairs can be seen searching for a place to start a new colony.  These mated pairs often look like a single insect because the male will follow the female closely to prevent rivals from mating with her.

Mated pairs are often found inside homes and shed wings may pile up against outside walls but neither of these events indicates an infestation in your home.  Mud tubes or insects swarming into your home do.

Termites can consume an entire piece of wood leaving nothing but the hard parts of the rings and the paint.  Fortunately the local species seldom does damage in the short term but if left untreated the cumulative damage can be significant.

The least expensive and effective way to deal with termites is to have your home treated while it is being built.  Unfortunately, since local building codes do not require treatment this is seldom done in Washington.  Your next best option is regular inspection to detect activity early.

If termites are detected in your home there are effective ways to treat for them that don’t require putting a tent over the house.  Applications made to the soil along the foundation can intercept termites as they move through the soil.  Any insects working above ground are killed when they return to the soil or when they come in contact with other members of the colony that have returned from the soil.