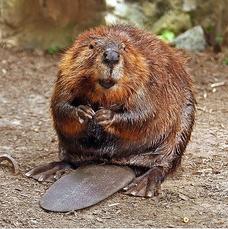 British-Canadian fur trader and renowned explorer, David Thompson once observed “this Continent… from the Atlantic to the Pacific Ocean, may be said to have been in the possession of two distinct races of Beings, Man and the Beaver.”

The observation may have been accurate considering there were an estimated 100 – 200 million of these animals in North America in the early 1600’s.

Second only to the capybara, beavers are the largest rodents in the world. Research suggests the animal evolved in Europe and Asia then migrated to North America across the Bering Strait about 7 million years ago.

Beavers are an important part of North American ecology. The dams, lodges, ponds and clearings they create support and encourage many other animals including salmon, bats, and numerous bird species.

While people aren’t fond of allowing their land to be flooded, beaver ponds help control flooding by trapping and slowing runoff.

Once prized for its fur the animal is now often considered a pest for plugging ditches and stealing trees.

Much to the frustration of gardeners and landscapers, beavers will often target a single yard for plants they like. Watching prized rhododendrons or fruit trees systematically harvested can drive most of us to take drastic measures.

As with all native wildlife, it is better to learn to coexist with them rather than exterminate them.

The first thing to consider is ‘am I encouraging damage’.

Sometimes we attempt to landscape with plants that are inappropriate for our location. A good example is fruit trees planted along a waterfront. Even if you put up an effective fence, the animals are going to be like a kid with a sweet tooth with his nose pressed against the glass of a candy shop. The first time that fence fails those trees are gone.

Better to plant Sitka spruce, elderberry, or cascara that are not attractive to beavers or plants with deep root systems capable of surviving being cropped to the ground like aspen, cottonwood and willow.

Wire fencing can be very effective at protecting large areas or individual plants but there are a couple things to keep in mind.

Beavers do not jump or climb but they are able to stand on their hind legs to access plants up to 3 feet high.

Any barrier must be sturdy enough to withstand a 40lb. beaver leaning on it or shoving its nose underneath.

As an alternative to standard fencing, electric fencing placed in two strands 8 and 12 inches off the ground can be very effective.

Finally, if the animal is causing flooding and can’t be discouraged any other way, it may need to be trapped and euthanized.

Extensive information about managing beavers without trapping them is available at the department of fish and wildlife web site at: http://wdfw.wa.gov/living/beavers.html

There are even techniques to prevent culvert blockage or prevent flooding even with a beaver dam in place.■