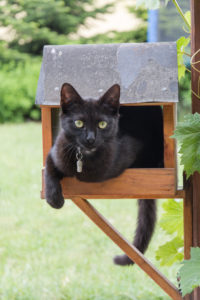 The Good, The Bad & The Ugly

Everyone loves living in a place where wildlife and people can co-exist.  That’s good.

When wildlife starts damaging our homes or putting our health at risk that’s bad.

When wildlife has to be destroyed because of ignorance, carelessness or irresponsibility, that’s ugly.

Last year, we removed raccoons from two dozen homes, one where the animal tore shakes off the roof to get in.  A local girl was bit by a raccoon while feeding it on her own deck.  A deer walked through a closed sliding glass door where the homeowner was feeding them on the deck.

Every year I’m called on to help with an ever increasing number of negative wildlife encounters and almost all have one thing in common, feeding.

Nothing attracts like free food. Fire up the barbecue and put up a sign that says “Free Food” and someone will show up even if you have a mile long dirt driveway on a dead end street.

Same holds true for wildlife.  Hang up a bird feeder and in no time you will have birds AND mice, rats, squirrels, raccoons, deer, geese, ducks and yes, occasionally bear.  You will also attract a host of predators like cats, crows, hawks, owls and coyotes.

Feed a raccoon and you have a friend for life AND its siblings, offspring, cousins, distant relatives, casual acquaintances and complete strangers.

Feed a squirrel and you (or a neighbor) will have a hole in your house and the pitter patter of little feet in the attic in no time.
“Free” feed your cat or dog outside by putting down enough food to last all day or by using a self filling bowl and you are feeding the neighborhood in no time.

Feeding causes animals to stop foraging and creates opportunities for diseases to be spread by sharing the same bowl or fighting with competitors or pets.  Distemper, worms, fleas, ticks and other ailments can be traded right there at the feeder.  There is a reason your veterinarian has you treat your pets for these things.  Wildlife doesn’t have that option.
Left to their own devices wild animals are well equipped to find food and shelter and natural foraging reduces the spread of disease.

Artificially high populations supported by feeders put constant pressure on your home and your neighbors homes as animals attempt to live close to the food.  Birds will peck out screens in attic vents.  Squirrels will chew through rubber seals around roof vents and blocking in soffits.  Raccoons will rip the screens out of foundation vents.  Rodents will exploit any opening big enough to get their head through.
Once inside, the animals build nests and raise young year after year.

During their stay many animals will pull down insulation or contaminate it with their droppings.  Rodents will chew on plumbing and wiring causing leaks and creating fire hazards.
This is usually when I receive the phone call asking to trap the offending animal(s).  And this is the point where I have to deliver the bad news.

Animal removal between March and August usually includes babies.  We wont take mom if the babies cant be removed first because they die.  This isn’t just ugly, it can cause odor problems that will force you from your home, fly problems as the bodies decay, and parasite problems as fleas, ticks and mites move away from the bodies.

Finding the young and removing them often means cutting open walls or pulling out the tub or shower.  The alternative is to allow the young to mature enough to start venturing from the nest then trapping the whole family or installing a device that will let them

exit but not re-enter.

In the event it is necessary to trap we do not relocate.  A special permit is required for relocation because the animal has to be acclimated to the release area and cannot be a detriment to animals or people that already live there.

We either have to release the animal back into the wild where we found it or, if it poses a danger to humans, arrange to destroy it.
So in case I’m being too subtle… DONT FEED WILDLIFE!

In rural areas one feeder is insignificant.  In a community the size of Ocean Shores (12 square miles) if one person in ten has a feeder that’s 500 feeders.  If the average person buys 20 pounds of seed a month that’s 120,000 pounds of feed every year.  That doesn’t even begin to count pet food bought for raccoons or stolen from pets.

If you really want to see animals in your yard without changing their foraging habits, landscape with plants that are attractive to them.  It doesn’t take many flowers for the deer to put you on the pruning circuit.  Many native plants attract birds and don’t produce so much excess that rodents will be attracted.  Bird houses are just as attractive as feeders and easier to maintain.

For more ideas,  Washington Dept. of fish and Wildlife offers an excellent book called “Landscaping For Wildlife In The Pacific Northwest”. And can be found at:  https://wdfw.wa.gov/living/book/