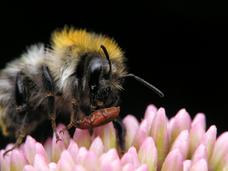 When you hear the word “bee” most people envision the honey bee, collecting pollen and nectar, building wax honey comb, and making honey.  We think of hives filled with industrious insects working together in concert in a complex  society.  Sometimes we think of allergic reactions or stings.

In the last few years, commercially raised honey bees have been afflicted by a combination of diseases that are so widespread that many bee farmers lose over 30% of their bees every year.  As a result many farmers and gardeners are turning to native bees for pollination.

There are about 20,000 species of bees and surprisingly, only a tiny percentage make honey.  Most don’t even form colonies but live solitary lives.

Locally we have a bright, metallic green, sweat bee that nests in the soil and feeds on pollen.  It’s about 1/4 inch long, looks like an ant with four slender wings and gets its name from its habit of drinking sweat to acquire minerals.

Alkali bees also nest in the ground and are used for pollinating alfalfa crops.  An organ in the alfalfa flower clobbers honey bees on the head and they wont visit them after a couple of attempts.

Bumble bees normally nest at ground level under objects or in abandoned animal dens.  Field research shows that they actually do a better job of pollinating crops than honey bees because of their habit of ’buzzing’ as they collect pollen.  This buzzing really sets the pollen flying.

Mason bees have also become popular for pollinating fruit trees, gardens and flowers.  They nest in small holes left behind by wood boring beetles or in the holes left in small branches when the cores rot out.

Leaf cutter bees are in the same family as mason bees but are named for their habit of cutting pieces out of leaves to line the cells of their brood nest.  Leaf cutters are good pollinators but can be less desirable in flower gardens where they can  damage leaves on desirable plants. Several species of alfalfa leaf cutter bees have been imported for pollinating alfalfa.

Not all bees are pollinators.  Some are complete opportunists.
Cuckoo bees are a family of bees that invade the nests of other bees (usually bumble bees) and freeload off their efforts, often to the destruction of the unfortunate hosts.

Because of diseases in honey bees, many native bees are being looked at as natural replacements.  This has met with mixed results.  Native bees require habitat to be productive. Since most are ground nesters it means setting aside land that is allowed to go unplowed and untreated with pesticides. Sadly, it appears that at least one attempt to commercialize bumble bees has led to the introduction of a foreign disease to our native populations.

Most bees have the ability to sting but unlike the honey bee, none are known for stinging except on occasions where they are stepped on or trapped against the skin.

As a pest control issue it is seldom necessary to destroy bees.  Honey bees can be turned over to a bee keeper.  Bumble bees, even if they are nesting in an attic, can be allowed to leave their nest at the end of summer before sealing the openings behind them.  Mason bees and alkali bees are often overlooked even when they are present in substantial numbers.

Next time you’re in your garden take a closer look.  Much of the buzzing you hear will be native bees that you may not have known were there working for you all along.

For more information there is an extensive knowledge base  about bees and other insects at: http://www.xerces.org/