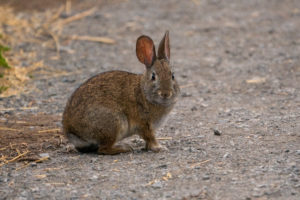 When residential gardeners encounter damage to their prized crops they are likely to blame deer and raccoons.  In many cases they would be right but just as often, the culprit may be the cute little bunny living on your street or in your yard.

Thanks to Hollywood and Disney, Americans have a tendency to overlook the destructive habits of cute cuddly animals we associate with movies.

In the not so distant past our ancestors were more likely to eat a rabbit than pet one.  In that by-gone era ( is 1930 really a by-gone era?) these farmers and hunters were more than happy to import wild animals commonly used for food and sport.  This was done with mountain goats, opossum, and pheasants too.

Washington state has native rabbits but they tend to populate the sage lands of Eastern Washington.

The Eastern Cottontail was introduced in the 1930’s and has succeeded in populating Western Washington with the rabbits we see today.

Wild rabbits prefer brushy habitat.  They like to eat new shoots and buds on plants and will ‘top’ flowers and girdle young trees by chewing off the tender bark.

Eastern Cottontails live in shallow burrows about 5 inches deep lined with leaves and fur.
Unlike hares and jackrabbits, which are born with  a full coat of fur and their eyes open,  rabbits are born with a light coat of fuzz with their eyes shut.  They must nurse for several days before they can forage on their own.

Rabbits mature in 2 to 3 months and can produce as many as 35 offspring per female per year.

Fortunately they are preyed on by many predators including coyotes, hawks, owls, and raccoons and they only survive about 15 months in the wild.

As long as there are enough predators to keep their populations in check the rabbit remains cute and cuddly. When there are not enough predators, look out!
Rabbits introduced into Australia in the mid 1800’s have destroyed entire ecosystems.  With no effective predators their warrens (colonies) and plant damage increased erosion, destroyed habitat, and displaced native animals.  These rabbits are still considered a plague to this day.

Domestic rabbits and cottontails are distant cousins but do not interbreed successfully.  If you have an unwanted domestic rabbit or get a bunny for Easter you should never release it into the wild. Even if they don’t survive in the wild they can spread disease in wild populations.  Many animal rehabilitators, pet stores, animal control services and even feed stores can help you find a new home for your domestic rabbit.  More detailed information about wild rabbits and their management can be found at:
wdfw.wa.gov/living/rabbithares.pdf ■