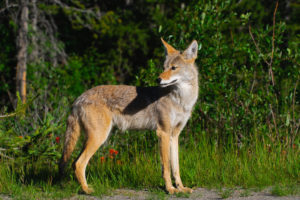 Once, coyotes (Canis latrans) were restricted primarily to the sagebrush lands, brushy mountains, and open prairies of the American West. Wolves occupied the forests.
Today, coyotes range throughout North and Central America.

At first glance, the coyote resembles a small German shepherd dog, yet its color can vary from animal to animal. Shades include black, brown, gray, yellow, rust, and tan. Coyotes also have shorter, bushier tails that are carried low, almost dragging the ground, and longer, narrower muzzles than their dog cousins. Adult coyotes weigh 20 to 35 pounds, with males being slightly larger than females. At the shoulder, an adult male coyote is about 25 inches tall.

• Coyotes are opportunists, both as hunters and as scavengers. They eat any small animal they can capture, including mice, rats, gophers, mountain beavers, rabbits, and squirrels, also snakes, lizards, frogs, fish, birds, and carrion (animal carcasses). Grass, fruits, and berries are eaten during summer and fall.

• Grasshoppers and other insects are important to juvenile coyotes learning the stalk-and pounce method of hunting.

• Pairs of coyotes or family groups using the relay method pursue small deer and antelope. These mammals are important food in winter; fawns may be eaten in spring.

• Coyotes occasionally kill domestic dogs (and foxes) that they consider territorial intruders. Coyotes are also very protective of their young and will attack dogs that get too close to their den and pups.

• Most hunting activity takes place at night. Undisturbed and hungry coyotes will hunt during daylight hours, and may be seen following farm machinery, catching voles and other small prey.

• Where coyotes are hunted and trapped, females produce more pups per litter than in areas where they are protected.

• Coyotes in captivity live as long as 18 years. In the wild, few coyotes live more than four years; the majority of pups die during their first year.

There were no documented coyote attacks on humans in Washington state until 2006. In April 2006, Washington Department of Fish and Wildlife officers euthanized two coyotes in Bellevue (King County)after two young children were bitten while their parents were nearby. These coyotes’ unusually aggressive behavior likely resulted from being fed by people.

Humans increase the liklihood of conflicts with coyotes by deliberately or inadvertently feeding the animals, whether by handouts or by providing access to food sources such as garbage, or pet food. When people provide food, coyotes quickly lose their natural fear of humans and become increasingly aggressive. Once a coyote stops hunting on its own and loses its fear of people, it becomes dangerous and may attack without warning.

• Don’t leave small children unattended where coyotes are frequently seen or heard.  If there are coyote sightings in your area, prepare your children for a possible encounter. Explain the reasons why coyotes live there (habitat/food source/ species adaptability) and what they should do if one approaches them (don’t run, be as big, mean, and loud as possible). By shouting a set phrase such as “go away coyote” when they encounter one, children will inform nearby adults of the coyote’s presence as opposed to a general scream. Demonstrate and rehearse encounter behavior with the children.

• Prevent access to fruit and compost. Keep fruit trees fenced, or pick up fruit that falls to the ground. Keep compost piles within a fenced area or securely covered. Cover new compost material with soil or lime to prevent it from smelling. Never include animal matter in your compost; it attracts coyotes. If burying food scraps, cover them with at least 12 inches of soil, and don’t leave any garbage above ground in the area—including the stinky shovel.

• Feed dogs and cats indoors. If you must feed your pets outside, do so in the morning or at midday, and pick up food, water bowls, leftovers, and spilled food well before dark every day.

• Don’t feed feral cats (domestic cats gone wild). Coyotes prey on these cats as well as any feed you leave out for the feral cats.

• Prevent the buildup of feeder foods under bird feeders. Coyotes will eat bird food and are attracted to the many birds and rodents that come to feeders. (See the handout, “Preventing Problems at Bird Feeders” for information on feeder management.)

• Keep dogs and cats indoors, especially from dusk to dawn. If left outside at night in an unprotected area, cats and small to mid-size dogs may be killed by coyotes. Pets can be easy prey for coyotes. Being raised by humans leaves them unsuspecting once they leave the safety of your home. If you suspect losing a dog or cat to a coyote, notify your neighbors. Once a coyote finds easy prey it will continually hunt in the area.

• Modify the landscape around children’s play areas. Shrubs and trees should be pruned several feet above ground level so coyotes can’t hide in them. Keep deterrents nearby in times of increased sightings. An old hockey stick, broom, or a pile of stones near the play area can help prepare children for an encounter and will remind them of effective encounter behavior.

Note: Many ranchers now attempt to kill coyotes only when damage has occurred. If your property is the home territory of coyotes that don’t harm livestock, they will keep away other coyotes that are potential livestock killers. Coyotes also benefit ranchers and other property owners by helping control populations of mice, rats, voles,
moles, gophers, rabbits, and hares.