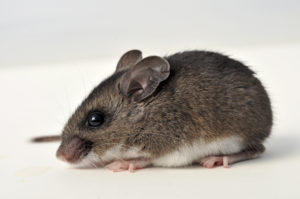 Unless we get one in our home we seldom think about this multitude of miniature mammals, but in every sense of the word the world is awash in a sea of mice.
One of the most common mice in America is the deer mouse.

Despite the way we feel about them this miniscule mammal is literally a force of nature.
We often hear foods described as “tastes just like chicken” but when you think about how many animals depend on the lowly mouse it’s a wonder everything doesn’t taste just like rodent.

Seriously, the mouse is a very effective forager and therefore very efficient at concentrating nutrients in its body.

This tiny animal is the engine that drives many of natures processes that we take for granted.

Deer mice breed every three to four weeks during the warmer months and less frequently during the winter producing on average 4 to 6 offspring but sometimes as many as 11 in one litter. Offspring reach sexual maturity in about 35 days.

Assuming a single female can reasonably be responsible for producing as few as 3 females per litter and do this every 35 days, one mouse could conceivably have over 265,000 progeny in just one year.

This sea of mice  is a huge resource for many of the larger animals we know and love.  Hawks, eagles, crows, cats,  lynx, coyotes, wolves, owls, snakes, opossum,  and even bear eat mice.

Mice are hoarders of food and cache it away around their territories. Mice are omnivorous and will steal pet food and raid our cupboards (I’ve even seen them eat bars of soap for the tallow) but they feed mostly on seeds. Deer mice are such efficient gatherers that they often collect many times what they can eat.

Due to predators, mishaps and limited memory many of these stashes are lost or forgotten and eventually become nurseries for plants that rely on the mouse to spread their seeds.
In spite of these beneficial characteristics there is a dark side.  Deer mice are the repository for Hantavirus (Sin Nombre virus).  This virus appears to have been evolving along with the mouse and is endemic throughout its population which spans the entire U.S. with the exception of the gulf coast.

Hantavirus causes an illness in humans called Hantavirus Pulmonary Syndrome (HPS) which has symptoms similar to pneumonia.  About 1 person in 3 that contracts this infection dies from it.

Washington State Department of Health receives between 1 and 5 reported cases each year and has found that 14% of the animals they test carry the virus.  So, for every 20 mice there are 3 that are infected.  The distribution of the virus isn’t uniform so there are pockets where all the animals carry it and pockets where none of the animals carry it.
Hantavirus is usually passed to humans through exposure to dust contaminated with urine or feces.  Never use a vacuum cleaner or broom to clean up after mice.  Soapy water or a solution of chlorine bleach misted onto contaminated surfaces will prevent dust from becoming air born and chlorine actually kills the virus.

(For additional information about hantavirus and avoiding infection see the Dept of Health fact sheet at http://www.doh.wa.gov/ehsphl/factsheet/hanta.htm )
There are three practices that will help reduce the likelihood  of a deer mouse encounter.

Eliminate places for them to live by keeping plants, wood piles and stored items away from the foundation.

Eliminate places for them to eat by keeping grass cut. Don’t  feed birds or pets outside.  Don’t put table scraps on the mulch pile unless you use a sealed mulching container.
Exclude them from your home. Insure crawlspace entries, foundation vent screens, garage door seals, dryer vents and plumbing penetrations are in good repair.