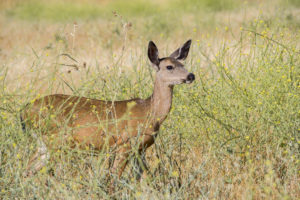 If deer could talk you could almost imagine this conversation.

“Ahhh… suburban life.  Friendly neighbors, good food, quiet manicured yards.
What more could any self respecting deer ask for?
Traffic is light so it’s a good place for the fawns.
And I can’t remember the last time I saw a predator.  There was a bear once but a guy came with a box of doughnuts and hauled it away.
I mean, this place is very respectable and very well appointed.
All the shrubs you can eat, fresh flowers, and did I mention the roses?
They’re EVERYWHERE!
I know it’s hard to believe, but I hear some neighborhoods are even catered.
The fast food places all serve bird seed but I’ve actually heard of places that serve cracked corn with apples for desert!
Yes… life is pretty good here in the ‘burbs.”

Deer really are the suburbanites of the animal kingdom.

Even in rural areas they live on the fringe of woodlands.

The mere presence of humanity takes pressure off deer populations by driving off predators.  Throw in some extra food and the populations can explode.
Aside from increased automobile encounters the negative consequences of high deer populations are disease and habitat destruction.

Deer don’t transmit any known diseases directly to people but they are a reservoir for Lyme disease and the ticks that transmit it.

There are many diseases and parasites that afflict deer and high population makes it easier for them to spread.

Over browsing destroys food and ground cover needed by deer and other animals.
Surprisingly, deer are pretty “high strung” animals.  Though they appear almost domesticated when standing in the yard, rehabilitators are reluctant to take adult animals because they die from stress and injuring themselves while in captivity.

For this reason the best treatment for deer usually involves letting nature run its course or euthanizing animals too sick or injured to recover on their own.
Suburban deer have a higher incidence of nonfatal injuries from car strikes than their rural cousins.  Fortunately, three legged deer often survive to live mostly normal lives without treatment.

There are a couple of afflictions deer suffer that are generally harmless even though they can appear quite alarming.  One is a non-native deer mite that causes deer to groom their hair until it breaks off leaving the coat looking patchy or bald.  The other is a benign growth caused by organisms transmitted by biting gnats.  These usually fall off and do not reoccur.

The suburban deer will often leave fawns in yards for days on end.  Their primary defense is camouflage so fawns lie very still even when approached.  It is easy to believe they are abandoned but unless mom is dead she will return to nurse.

If you find a fawn the best advise is “leave it alone”.  Keep pets and children away and avoid approaching it.  A doe can get quite aggressive.

The only significant damage deer cause is to plants they feed on.  The Wa. Dept. of Fish and Wildlife has a web page dedicated to this topic at:
http://wdfw.wa.gov/living/deer.html#tips

It even includes lists of attractive and resistant plants for your landscape.
If you garden with the understanding that deer are part of your landscape then you won’t be disappointed, but if you insist on planting things deer are attracted to then have a plan to defend it to the last scrap before you plant.

Otherwise the next topic of conversation for your neighborhood deer could be,  “Do you prefer the roses or the tulips with your greens?”