Blame the dog. Blame the cat.   But really, it’s not their fault.

Man and beast alike have been plagued by fleas for millennia.  In the not so distant past they were so ubiquitous our forbearers included them in their love letters.

To avoid getting fleas it helps to understand the process that brings them into our home and what we have to be aware of to keep them out.

There are no baby fleas, little fleas that grow to be big fleas.  There are no fleas that fly.  Fleas have a lifecycle like that of the butterfly:  egg, larva (caterpillar), cocoon, and adult.

The insect must have a host in order to survive and can’t last more than a few hours on its own.

Our pets encounter fleas when they are outside and come in contact with native rodents and wildlife.  We’re often told it’s the yard but I’ll explain shortly why that’s not the most likely  source.

Being a parasite isn’t easy.  The adult flea must find a host within a few hours after emerging from its cocoon or it dies from dehydration.  Then they must find a mate.

Female fleas need a component found in red blood cells in order to produce viable eggs.  She must feed at least once before laying eggs.

The flea lays between 200-400 eggs during its 2-3 month adult life.  It does not get off the host and go hopping around to lay eggs. To avoid dehydration she lays her eggs on the animal and they fall off where ever the animal travels.  Those that fall off in the open usually do not survive but those that fall off in a den or a pets favorite resting place generally do.

Adult fleas feed on blood but they excrete most of it undigested as droplets which dry and fall from the host just like the eggs.  When the eggs hatch these dried blood droppings, which are high in protein, are fed on by the developing larvae.

Eggs hatch within 3-7 days or they die. 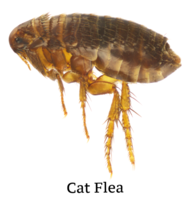 The emerging larvae feed on blood droppings and other protein rich materials like pet food.  Larvae mature in about 7-10 days then weave a cocoon.

Inside the cocoon metamorphosis transforms the flea into an adult in about 7-14 days.  The cocoon can protect the mature flea for about 4 months.  To avoid death from dehydration the adult flea often will not emerge from the cocoon unless stimulated by the presence of a host animal.

Heat and carbon dioxide will cause the adult to emerge but the strongest stimulus is vibration.  Once stimulated, the flea performs an amazing feat by ripping through the cocoon and jumping in the direction of the stimulus in about 1/10th of a second.  Thus the process begins again.

All stages of the flea are vulnerable to direct sunlight.  Cutting the lawn short enough for the sun to reach the soil kills them. Inundating rain drowns developing larvae and smothers cocoons.  Fleas in the yard are usually limited to secluded areas under decks and near animal dens until your pet contracts them then the dog house can be added.  Any exterior treatment should be limited to these areas.

Cats amplify their exposure by tracking animals to their dens where they have greater opportunity to encounter fleas.
Raccoons, squirrels, rats and mice all carry fleas.  There have been studies which indicate the incidence of fleas has a direct correlation with the population of these animals.

Once fleas get into your home it hardly matters who’s to blame you just want them gone.

A mild infestation in your home can usually be eliminated by treating your pets with veterinary prescribed products like Capstar, Revolution and Advantage.  Over the counter remedies have not demonstrated an equivalent level of control to these products.  Once treated, the emerging fleas are attracted to your pet which kills the flea and breaks the insects life cycle.

For severe infestations or mild infestations where animals have been removed from the home it is necessary to treat the carpets and upholstered furniture to get at the developing fleas.

Properly applied, professional products tend to kill the larvae and adult fleas immediately.  Since most products last more than 7 days the eggs succumb when they hatch.

The stage most difficult to manage is the cocoons.  Cocoons are impervious to most pesticides.  First the insect inside has to reach maturity, which means keeping the temperature around 70 degrees for up to two weeks.  At the same time, we have to vacuum frequently to get the adults hopping around in the treatment.

There are low toxicity growth regulators (materials that prevent the insect from maturing) that can protect an area for up to 7 months but the most practical way to avoid a flea infestation is to keep your pets treated year ‘round.  If the fleas aren’t able to live and feed on them they can’t infest your home in the first place.