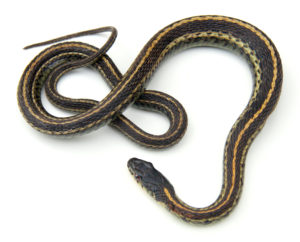 St. Patrick is credited with driving the snakes from Ireland in the fifth century. While they were undoubtedly the “two legged” variety, his descendants in the fourteenth century could have wished for real snakes to help consume the rats that bore the plague.

Because of its lowly stature the snake has been relegated to the status of demon, forced to eek out its existence crawling the earth on its belly.
Personally, I have a soft spot in my heart for anything that eats rodents.  Next to the mosquito, rodents have been and continue to be the source of more human misery than all the wars ever fought.

Despite an undeserved reputation, snakes fill an extraordinary role in controlling rodents by being able to follow them into their very dens.

In Western Washington the snakes you most often encounter are the Northwestern Garter Snake and the Common Garter Snake.

Like all snakes the Garter is cold blooded.  Their movements are kind of lethargic until they warm up.  They can often be found “sunning” themselves on rocks, sidewalks, and unfortunately roads.

After a good morning sunning the snake will be mobile enough to pursue prey.  Aside from rodents they will also eat insects, earthworms, tadpoles, frogs, small fish, and slugs.
Garter snakes have a highly developed sense of smell that not only allows them to find prey, but also to communicate with each other to congregate and to find mates.

For many years it was thought that garter snakes had no venom, but recent research has revealed that their saliva contains a mild neurotoxin.  Dangerous if you are a mouse but there are no known cases of anything more than mild itching and irritation in humans.

Most reptiles lay eggs but garter snakes are born live.  The female actually retains the fertilized eggs in her body.  All the nutrients for the development of the young are contained in a yolk sac and they only rely on the mother for respiration.

When the young are born (about 15 in a litter) the eggs are expelled with them.

Snakes are not “slimey”.  Their bodies are covered in scales which protect them and aid in crawling.  The scales wear down over time and as the snake grows, the old scales are shed for new ones.  Rather than replace scales one at a time, the snake grows a new skin underneath and sheds the old skin all at once.

While shedding, the snake usually tries to find a dark secluded place where it can slough off its old skin.  Attics and wall voids on older homes occasionally shelter this activity, but garter snakes do not “infest” homes.  If they do get in it is usually accidental, and they want to get out as badly as you may want to get them out.

They also do not hibernate in the walls.  Garter snakes establish communal sites called hibernacula.  The snake itself doesn’t actually hibernate but enters a state of reduced metabolism called “brumation”. Not quite a state of complete unconsciousness, but awake enough to move and seek water when needed.

No matter how afraid of snakes you may be, killing Garter snakes is unwarranted.  Their presence in the yard is a sign of a healthy ecosystem and aside from that, they are helping keep the vermin that can actually harm you in check.■