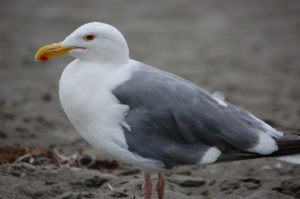 Most people in Washington have seen them and any trip to the beach will provide an opportunity to encounter them close up.

Glaucus wing gulls, Western gulls and recently California gulls  are commonly found along the Washington coast and can be found standing around in small groups or begging handouts from passing cars.

Gulls are highly adaptable and have been around for 30 to 33 million years.

They spend their days foraging for food and will eat just about anything they can swallow whole including fish, crabs, clams and chicks of smaller bird species. They are opportunistic feeders and will steal food from other animals, scavenge road kill, and follow tractors to consume insects and mice. The birds are quite intelligent and  will follow ships to prey on fish turned up in the wake. They have also been known to drop shell fish on rocks or pavement to break them open.

All gulls are protected under the “migratory bird act”.

Gulls usually breed on the many sandy islands in the harbors and estuaries along the coast but many homes and motels also support nests where dominant animals rear their young.  If you have a nest on your roof it may be removed at any time prior to eggs being laid but after eggs are laid the nest must be left until the chicks are full fledged (late summer).

Gulls form monogamous pairs and typically rear 2 to 3 chicks a year.  The chicks start out with downy gray-brown feathers which are quickly replaced by flight feathers.  By mid summer these spotted gulls can be seen all along the coast.

Gulls are very attentive parents and will come to each others aid to drive off predators that approach nest sites.

Large hawks and eagles will prey on adult birds and raccoons and large owls will raid their nests.

The birds can adapt very quickly to changes in their environment and are usually one of the first animals to capitalize on new food and nesting resources.  This isn’t always best for individual animals but has allowed them to populate most coastal areas and many inland lake and river systems around the world.

Landfills, dumpsters and trash cans are irresistible sources of food and will attract gulls in mere minutes.

As with other wildlife, feeding these birds usually does more harm than good.  Because of their intelligence and opportunistic character they learn very quickly that people are a great source of handouts however, bread and French fries are not an adequate substitute for the high protein foods they have evolved to eat.

Worse yet, birds that are fed from cars become habituated and treat cars like rolling vending machines.  Many birds are injured each year by cars moving as slow as 5 miles per hour because they are anticipating a handout from every car that goes by.  Birds injured in this way usually have to be euthanized because the hollow bones in the wings get fractured and can’t be rebuilt.

Aside from the tendency to raid garbage the single biggest complaint about gulls comes from them perching on roof tops where they deposit their droppings, build nests and interrupt sleep with their raucous calls.  Feathers and nesting materials clog gutters and droppings contain ammonia that damages roofing.

Trip wires have consistently proven effective at discouraging gulls because they can’t land on the wire.

On steep roof lines a single or double trip wire is often all that is needed to discourage gull activity.

Tall buildings with shallow pitch roofs are particularly attractive to them for nesting and access to the best food.  In these structures an extensive grid of trip wires may be the only effective deterrence.

Spike strips have been used for gull control but are strongly discouraged because of the injuries they cause to the gulls feet.

While there are products available to home owners a licensed bird control contractor is recommended for installing these devices to avoid creating an installation that will injure the birds.■