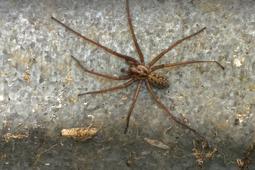 Hobo spider or giant house spider (Takes a microscope to tell the difference.) 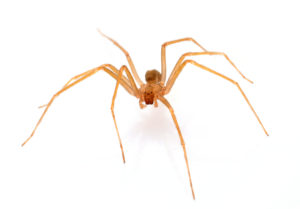 Here we are on the cusp of spider season in the great Northwest and it wont be long before the media are crawling with stories of Hobo Spiders and Brown Recluse.

The media are in the business of selling sensation.  Sorry, but if it doesn’t grab and hold your attention you go do something else.  And what could be more sensational than an invasion of venomous spiders attacking helpless people in their sleep!

Brace yourself,  it is almost all myth.

Most spider stories from the Northwest are careful to use such terms as “possible” or “suspected”.  I have yet to encounter an article where the spider was found at the scene of the crime, caught in the act of biting and then identified as a Recluse or Hobo Spider.

Once upon a time the Brown Recluse held the distinction of being blamed for horrible wounds requiring skin grafts and amputations but since no established populations of Recluse have been found in Washington that mantle has generally passed to the Hobo Spider.

The myth of the Recluse and Hobo spiders has grown to the status of urban legend and every year I encounter stories from people who claim to have been bitten or know someone who has.

Although people in the medical profession are amazingly adept at caring for us they are loath to say “I don’t know” when dealing with a patient wanting a concrete explanation for a slow healing sore.  Patients don’t like to hear “I don’t know” but will readily accept “It’s a spider bite” even though there is no possible way to identify a spider bite by examining a wound.

Hobo spiders are not strong climbers and are seldom found above the first floor.  They often become trapped in tubs and sinks because the hooks on their feet cant grasp the slick surfaces.  They do not climb up through the drain.

The Hobo spider has poor eyesight and has been known to run toward people when surprised.  This makes it seem more intimidating but is only because it cant see you.

Research has shown that most spider bites are defensive and contain no venom.  Also, there is no evidence that spider fangs transmit organisms which cause infection.

There are many causes more likely to create ulcers in the skin aside from spiders.  Some of these include other insects like fleas and ticks.  Other causes can be traced to diabetic ulcers, fungus and most often to several strains of staph infection.

So the next time you hear a terrifying spider story remember,  A myth spreads like wildfire. The truth spreads one person at a time.

For additional information about Recluse and Hobo spiders there is an extensive website hosted by U.C.Riverside at   https://escholarship.org/uc/item/6sj701ns  There is also excellent information available at the Burke Museum of Natural History at  http://www.washington.edu/burkemuseum/spidermyth/index.html