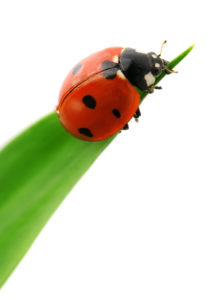 Your house is on fire your children do roam. Except little Ann, who sits in a pan, weaving gold laces as fast as she can.

Most of us have heard some version of this rhyme during our childhood.  Though the exact origin is unknown, many believe it comes from the centuries old practice of farmers burning their fields in the fall.  The adult beetles would fly away, the larvae would scatter on the ground, and the pupae (little Ann) could not flee and were caught in the pan, so to speak.

The name “ladybug” appears to be an Americanization of the name Lady bird or Our Lady’s bird. The name originated in Britain and may have come from associating the beetles red cloak with Mary (Our Lady) who was often depicted wearing a red cloak.  The seven spots on its wings represent the seven joys and seven sorrows of Mary.

Most entomologists refer to them as lady “beetles” because true “bugs” represent a different family of insects.

Outside Britain, lady beetle spots vary in number and size. Some varieties are even black with red spots.

There are thousands of species of lady beetle world wide.  Most are beneficial but some can damage plants.

Few people would have trouble recognizing an adult lady beetle but the young are often overlooked.

When it comes to controlling aphids, few insects are anywhere near as efficient as lady beetle larvae. 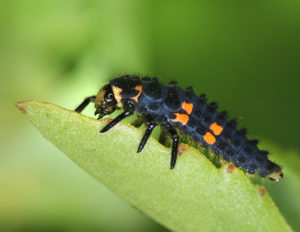 Consuming as many as 50 insects a day they can cut a swath through aphids and other sap feeding insects like the grim reaper. As adults this appetite slackens to about 20 insects a day.

Lady beetles reproduce all summer long, so their populations can expand to keep pace with the aphids.

Lady beetles have long been recognized for their ability to control crop pests and modern times are no exception.

Mankind has waged a running battle with destructive food pest since time immemorial.  Fire, poisons, collecting pests by hand, flooding, plowing, you name it, and it has probably been tried and in many cases is still practiced.

Using predatory insects is one of humanities more successful agricultural practices, but even modern successes are vulnerable to the law of unintended consequences.

Asian lady beetles were released to control aphids in fruit trees in eastern Washington when a particularly virulent strain of aphid threatened to destroy them.  This met with mixed success because the adult beetles may choose to fly away from where they are released in spite of there being plenty of prey and habitat.

It took many years, but Asian lady beetles finally became established and can now be found throughout Washington. The good news is that they continue to be efficient at reducing insect pests.  An otherwise, healthy Asian lady beetle can live up to three years and may consume as many as 5000 aphids in its lifetime.

The bad news is that they have some annoying habits and may actually be “out competing” their native cousins.

Like all Lady beetles these can inflict a sharp pinch.  They exude blood through their joints when they are stressed (a defense mechanism that can make predators sick to their stomach).  The yellowish blood can stain surfaces and is a contaminant that ruins the flavor of wine even in very small doses.

The Asian lady beetle evolved to “winter over” by congregating in large numbers in rock outcrops.  This overwintering trait has led to the biggest singular complaint about this beetle, its habit of invading homes in the fall.  This usually reveals itself mid winter and early spring as heating systems wake the insects causing them to migrate to the interior instead of back outside.  Sometimes hundreds of them will be attracted out of the attic to interior windows.

Under these circumstances the use of a shop-vac to collect the insects is preferred since flying insect sprays may kill them but then they are still laying around dead.

As with other nuisance insects, the maintenance of our homes is the best prevention.  Keeping our homes sealed, caulked, and painted can greatly reduce the number of insects that make it inside.  If needed, black light traps placed at a distance from a home can attract many of them away.

It is seldom necessary to resort to pesticides for their control, but if all else fails, applications to a building’s exterior can reduce the number that enter the home.  There is a risk that the insects’ bodies may attract carpet beetles which also feed on woolens and feathers.   So this really is the method of last resort.■