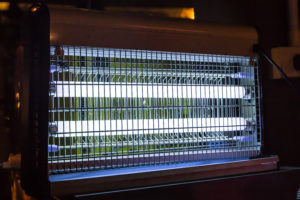 For the last few years the news has been abuzz with warnings about West Nile virus and mosquito born illnesses and as the warmer days of summer wear on and the dog days of autumn approach (is it that late already?) concerns of mosquitoes abound.  Public awareness of mosquitoes has been raised to a near fever pitch and in response American industry (qualified or not) is trotting out a whole array of gadgets, gizmos, and concoctions to put your mind at ease.  There are even professional pest control services offering wholesale yard fogging and treatment.
Mosquito born illness is a real concern but before you get out your wallet let’s get familiar with the playing field.

There are a lot of products in the market place but they essentially fall into three categories.  Repellants, traps and pesticides.  There are pros and cons to each of these.  You can find entire books on the subject but the condensed version goes something like this.

Repellants:  Repellants can be effective but within a very narrow range of applications.  Repellants tend to be  gaseous in nature and therefore require very calm conditions, not often found at the beach.  Citronella for instance, can help but it takes quite a bit to be effective.  Several devices may be required to cover even a small area.  There are devices that claim to repel mosquitoes using sound, however they haven’t proven themselves to be effective.  To my knowledge the most effective, proven repellant is “Deet”.  Deet is the active ingredient in many personal repellants that are applied to clothing and skin and has a well established track record.  Deet doesn’t work by itself but when used with proper clothing can be very effective.

Traps:  There are many devices for trapping mosquitoes but overall this is a relatively new field that is still marginal at best.  Light traps (bug zappers) have been around for years but it turns out mosquitoes aren’t attracted to the light.  More often than not, the mosquito like insect found in light traps turns out to be midges, an insect not capable of biting and not generally considered a pest.  Newer traps, some costing upwards of $2,000.00, employ a number of approaches to attract mosquitoes.  Some utilize carbon dioxide to mimic human respiration or octenol to mimic human odors or heating elements to mimic the human heat signature.  One even used the sound of the female mosquitoes wing beats (this is fairly effective at attracting males but since they don’t bite it isn’t much relief).  In independent testing even the best traps were not broadly effective.  While trapping has shown promising results and will probably become the product of choice for homeowners it is still a fledgling science several years from maturity.

Pesticides:  There are many products labeled for use against mosquitoes (hundreds actually) and many that are quite effective but they all share similar problems.  If it will kill a mosquito it will kill most other insects including the beneficial ones.  There are currently none that target just mosquitoes.

Historically, the most effective mosquito control programs have been run by municipalities.  State and local programs however, require community support and funding.  Until such a program is established here there are some sensible things you can do.

Mosquitoes need water or marshy soil to breed and don’t fly great distances from their breeding sites so modifying the environment is one of the most effective ways of managing mosquitoes around your home.  Eliminate sources of standing water on your property.  Buckets, spare tires, and tarps are just a few likely areas.  Dirty gutters and downspouts can trap water for weeks, clean them.  Clean bird baths every 3-4 days.  Add Mosquito fish or “Mosquito Dunks” (a fish friendly product made from inert bacteria)  to ponds.  Treat the culvert under your driveway with “Mosquito Dunks”.  Marshy soil can be treated with a granular version of the “Mosquito Dunk”

Seal your home against mosquitoes by keeping screens on doors and windows in good repair.  For occasions when a mosquito does make it into your home a pyrethrum based flying insect spray, vacuum, or fly swatter are quite effective.

Protect yourself.  During periods of mosquito activity wear long sleeve shirts and  full length pants.  Avoid dark clothing especially red and black that give off heat signatures attractive to mosquitoes.  Use repellants when out doors. These are usually applied primarily to clothing and exposed areas of skin.

So, there you have it.  The most effective things are the ones that have been around for the last century and while promising  new approaches are on the horizon they are not yet ready to make a significant impact on the problem.