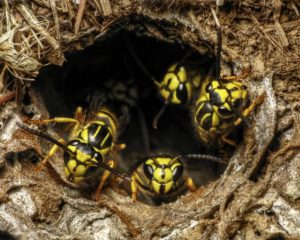 Here I am, enjoying America’s second national pastime (mowing the lawn).  When suddenly I am confronted by an angry cloud of winged homesteaders who are not too happy about me mowing the lawn around their front door step.

As I set a personal best record for the hundred yard dash, I come to the conclusion that my new neighbors have got to go.
This type of encounter is not uncommon and, besides being painful, can be dangerous.  What I have encountered is a nest of yellow jackets.

Yellow jackets and Bald Faced Hornets (not true hornets) are closely related to hornets but are generally much smaller (about 1/2in. long).  Their nests are begun in the spring and are made from a papery substance which they make from a mixture of wood and their saliva.  The nests are usually built in abandoned animal burrows in the ground or in rotting stumps and logs.  Occasionally they will build their nests under eaves or in other exposed areas (there are other paper wasps that nest exclusively in the open).  There is only one queen in each colony and she lays all the eggs.  She rears the first few workers by herself.  After that she doesn’t leave the nest at all and everything that is done in the nest, except egg laying, is done by the workers.

The paper wasp hatches from its egg as a larva.  In this form it has no wings or legs and must be cared for constantly.  There is an unique relationship which has evolved between the workers and the larva.  The workers feed mainly on a sugary substance which the larvae secrete and the larvae depend on the workers for food.  The workers collect insects and will scavenge just about any type of protein material to feed the larvae.  The workers can be quite aggressive in their foraging activities and have been known to drive people from camp sites and picnic areas.  In the fall the queen stops laying worker eggs and begins laying eggs that will develop into queens and drones (males).

Once those insects are mature they leave the nest to find a safe haven for the winter and there are no larvae left in the colony to feed the workers.  This causes an increase in aggressive behavior in workers until they eventually starve.  The colony dies and the cycle begins again in the spring.

Extreme caution should be used when attempting to treat a wasp nest as some colonies can contain populations up to 1000 insects.  Best results may be obtained by treating in the evening after the workers return to the nest.  A bee suit may be required to treat some colonies.  As with honey bee stings, wasps stings may cause allergic reactions.  Should you have an adverse reaction like extreme swelling, or shortness of breath, tightness in the chest, or other allergy symptoms get medical attention immediately.