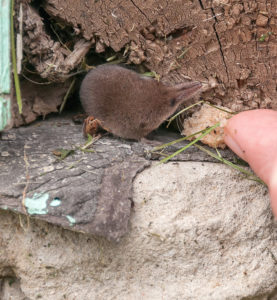 We have all heard of shrews and many of us have even seen them but almost no one gives them a second thought.

Western culture uses the term shrew to describe women that are argumentative and hard to live with.

This isn’t the case in all cultures. In China and Taiwan the word for shrew is the same as the word for money. Taiwanese believe the shrew is a sign of money coming. If you kill a shrew, it cuts you off from financial good fortune.

Shrews are small. They don’t steal our food or damage our homes. They don’t carry any known diseases. So, they are easy to overlook.

This probably explains why there is so little information available about them.

Shrews are often confused with rodents because of their size but aside from that, they have little else in common.

They have very high metabolisms. So much so, that they need an abundant food supply and access to lots of water. Dehydration can kill them very quickly. Fortunately for shrews, most of western Washington is attractive habitat for them and they can be found in wetland and forest areas throughout the state.

Shrews will often enter runways made by voles and moles in search of worms, insects and fungi.

They have diverse appetites and are known to eat slugs, snails, frogs, and occasionally, mice and other shrews. They will also scavenge dead animals.

According to the Washington Dept. of Fish and Wildlife there are nine species of shrews found in Washington.

Of those the most common is the vagrant shrew. This animal can easily be mistaken for a large mouse but a close look will reveal its long slender nose. Shrews don’t have cheek bones so their faces appear more pointed.

The vagrant shrew has a unique adaptation, it is the only known terrestrial mammal that uses echolocation. Though not as refined as a bats, it can detect objects ahead and around corners up to 90 degrees.

Other shrews also have impressive adaptations .

Water shrews have hairs between their toes that allow them to run on water.

Short Tailed shrews are the only known mammals in North America to have venom in their saliva.

The Etruscan Pygmy shrew is the worlds smallest mammal by weight. It is only 3 to 4.5 cm. long (excluding the tail), weighs about 1.8 grams and eats 1 1/2 to 2 times its body weight daily and it only lives about 15 months.