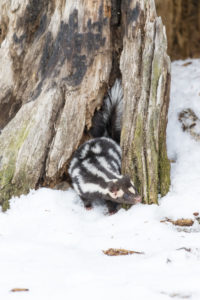 Armed with spray that is both repellent and irritating enough to cause temporary blindness, the skunk is the undisputed master of chemical warfare in the animal kingdom.

The skunks defense is so effective that there is hardly a person alive who can’t describe a skunk and its odor. Their distinctive black with white stripes serve as warning instead of camouflage.   However, western Washington is home to several species of skunk that are spotted.

Spotted skunks are generally beneficial and routinely prey on rats, mice, and insects. They also scavenge and will climb trees to prey on birds and eggs.  Occasionally they will eat fruit.

Until recently they were thought to be related to mink, ferrets, and badgers.

Recent research has revealed that they are distinctly different and they have been moved to a branch of their own on the tree of life.

While all carnivores, including dogs and cats, are equipped with scent glands used for marking territory the skunk has evolved this trait into a highly effective defense mechanism. So effective in fact that skunks seldom run from predators like wolves, coyotes, and mountain lions.

While this defense is very effective it does have its limitations.  Owls have no sense of smell and are the one animal that routinely preys on skunks.

The other major cause of mortality is the automobile.  Skunks are so dependent on scent for protection they spray cars rather than running away.

Skunks don’t know when their glands are empty so they only spray as a last resort.  They will stomp their feet to attract attention, and charge predators to intimidate them, and if pressed will handstand to appear larger.

Skunks have evolved nozzles which allow them to accurately direct spray at predators several feet away but if they can’t see a threat they can deliver their scent as a fine mist or fog which will hang in the air and discourage most attackers.

Skunk scent is so potent that the human nose can detect it at concentrations as low as 10 parts per billion. That’s equivalent to putting 1 drop in 1375 gallons of water. (that’s 25, 55 gallon drums)

Skunk musk can linger for weeks and degrades through a process called oxidation.   Some household products can help speed up this process but the old wives tale about using lemon or tomato juice is ineffective.

Thanks to William Wood, a skunk researcher, there is a treatment for pets that actually works.  He recommends a recipe of;  1qt. 3% hydrogen peroxide, 1/4 cup baking soda, 1 teaspoon of dish detergent. Mix in an open bucket outside. (this mixture releases a lot of gasses so a sealed bottle may burst) Wash your pet keeping the solution away from eyes, let stand 5 minutes and rinse thoroughly.

Decks and siding can be treated with diluted bleach. Surfaces should be tested to insure they will not fade before you treat them. (don’t ever use bleach on your pet)

Skunks can get rabies but not all skunks have it. A skunk that is aggressive and “attacks” someone should be tested (not just for rabies but for other diseases such as distemper). Normal behavior for a skunk is to avoid confrontation if given the chance.

You are more likely to contract rabies from a pet than directly from a skunk so, keep your pets shots up to date.

If a skunk does set up a den under your home or deck they can be encouraged to move by shining a light into the space and playing a radio with the bass turned up.

These devices should be installed after dusk to avoid startling them or trapping them inside.  A couple of days is all it usually takes for them to move along.￭