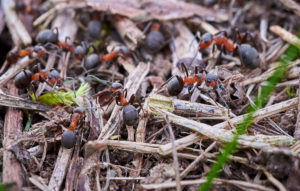 As you may have noticed Washington state is a popular place to live.  Many people moving here are from parts of the country where “fire ants” are common.

Fortunately for you folks I have a little peace of mind. There are currently no fire ant colonies established in Washington.  It’s possible this could change at some point in the future but hasn’t happened yet. 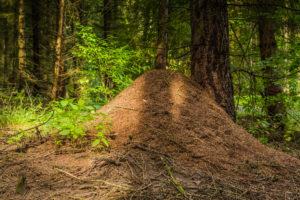 What we do have here is a species of formica ant commonly called a “Thatching” ant.  This ant is often thought to be a fire ant but is in fact a very beneficial neighbor. The local variety is black with a red head and can be found in yards throughout the state.  They are known for the mounds of pine needles or grass “thatch” used to build their nests.  The mounds can be impressive, occasionally over 4 feet in height, and are a very complex feat of insect engineering.

Mounds are constructed in several levels and often extend twice as far below ground as above.  Surprisingly, even after a torrential downpour the interior of a healthy mound is nearly dry.  Inside, the mound is an air conditioned sanctuary protected from severe moisture and heated by decay.  The colony bustles with activity, expanding the nest, gathering food and tending the young.  Young are moved up or down in the mound to keep them at optimal temperature for healthy development.

Thatching ants are natures janitors but they do more than gather thatch.  They feed extensively on other insects and are often a principle control for damaging species.  In fact they are so effective at controlling pests that in some countries they are protected by law.

Foraging trails can be quite intimidating.  Frequently two to six inches wide extending from the mound to feeding areas hundreds of feet away.

I have encountered trails that span two and three hundred feet.

While this ant is mostly beneficial it can occasionally become a nuisance.  Very young seedlings can be damaged if they are close to a mound.  Foraging ants may crop grass to clear a trail creating bare spaces in lawns.  They will tend aphids for honeydew and protect them from predators like lady bugs causing localized aphid problems.  Ant mounds are also heavily defended by workers that can inflict a hard pinch and spray of formic acid.

The general rule for this ant is, if the nest is against the foundation of your home or in an area where young children could stray into it, then it is appropriate to relocate or treat the mound.  Anywhere else it’s best to leave it alone.   If you don’t protect the good ants you end up having to take over their job. ■