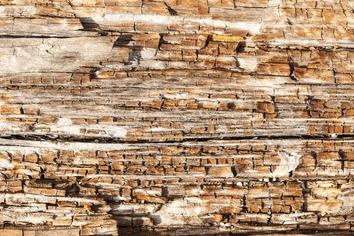 When most people think about pest control they think about rodents or insects but did you know that the number one cause of damage to structures comes from decay fungus?  When  home owners discover this damage they find what is commonly referred to as “dry rot”.  But, it should be noted that dry rot doesn’t start out dry.

Rot is caused by fungi closely related to mushrooms.  Fungi (plural for fungus) are related to plants but do not produce chlorophyll.  This means they can’t use sunlight to build the complex sugars needed to sustain life so they have evolved a different means to acquire them.

Fungi are the buzzards and jackals of the plant kingdom.  If a plant is injured or dies they will be the first scavenger on the scene.  This can be a problem for those of us building our homes from dead plants (wood).

Wood may not appear very tasty to you and I but the cells that give wood its strength are made from long strings of complex sugars called lignin.  When fungi damage wood they break down the cells.  According to experts, by the time damage is visible the wood may have lost as much as 80% of its strength.

Fungi grow by extending tiny hair like filaments, called hyphae (hi-fee), through the cell walls of the wood.  Hyphae have two functions.  They secrete powerful digestive enzymes which break the lignin into simple sugars and they absorb the digested sugars to support the fungus.  Water plays a crucial role in the growth of decay fungi.  It is needed to transmit and diffuse the digestive enzymes into the wood and to carry the digested sugars back to the hyphae.

Decay fungi have very strong survival adaptations.  When water becomes scarce some fungi can use their hyphae to pump water from wet areas into dryer areas.  If the water dries up they enter a dormant phase which can be sustained for years.  While dormant it doesn’t grow or cause damage but as soon as the water returns it picks up right where it left off.  There are even some indications that suggest that cycles of drying and wetting can encourage faster growth by opening cracks and fissures into the wood making it easier for the hyphae to penetrate.

A fungus spends most of its life as a mass of almost invisible hyphae until it has gathered enough energy to reproduce.  At this stage it will form a mushroom like fruiting body.  Though related to plants fungi do not produce seeds.  They create spores which are formed in the fruiting bodies.  Spores are smaller than most dust and are so common that they are present on virtually every surface and in every breath of air.  Once the spores encounter the right conditions they break open and start their life cycle anew.

To protect your home from decay fungus it’s imperative you control the water.  Paint, caulk and water sealants along with  inspection and regular maintenance are the front line of defense.